The art work of Cis Koetse

In The art work of Cis Koetse, trained at the Minerva Academy in Groningen and at the Academie des Beaux-Arts in Paris 1966/1967, the past plays an important role. Her family history and her personal memories are often the starting point in this.

For example, she quotes in "In the garden with Velasquez" (2007) this great Spanish painter, in which she portrays the famous Infanta with a young girl, based on a children's photo of herself from her family album, which can be interpreted as a self-portrait. By merging people from different ages, there is often a certain alienation in her work that forces the viewer to think. Furthermore, Koetse draws from classical mythology, as for example in "The Trojan Horse" (2010), a work in which the mythical and symbolic go together.
Koetse is a draftsman purely sang. With the pencil she knows how to achieve the maximum of her abilities. Even in her paintings, often in a mixed technique, the sign-like predominates. She is the strongest in the small size where she knows how to direct the monochromy of the pencil to the desired shape. Her hard reality is not represented in her work. The work of Cis is lovely, sometimes almost romantic. This is her reality, based on her own past.
Drs. Harry Tupan
Director Drents Museum Assen
Portrait assignments at home and abroad, including Germany, France, England and America.

Work in possession of the Drents Museum Assen and Museum Möhlmann (Appingedam) collection. Private property at home and abroad 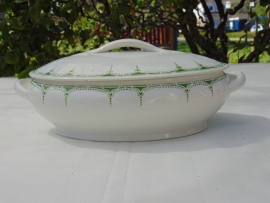